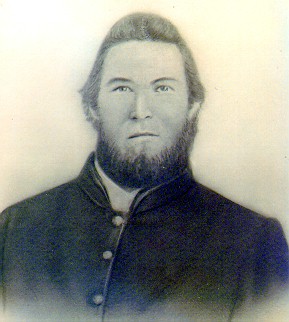 Tennison Jarvis grew to manhood on his father's farm "the old Jarvis place." The work of a middle class farmer must have been good for him as the only existing photograph of him shows him to be a stout, well-built man.

He met and courted a local girl, Mary Jane Boyer photo and they were married January 17, 1850. Mary Jane was the daughter of Thomas Boyer who owned and operated the local grist mill. Tennison bought 200 acres along the Lewisville Clemmons Road at the place where the Styers Ferry Road enters. It was roughly square in shape and its Northern boundry ran a few yards North of the present site of the old Interstate 40 (now 421) and the Lewisville-Clemmons Road.

He built a fine two story log house next to the only cleared field on the place in 1855. It was on a 15 acre field he had bought from the Whitmans. Although I (Billy Wayne) was born in 1942, I can still remember this old house. My Grandfather, John Jarvis, used it for a barn in later years. I played in the old barn as a boy, many times. The house had 4 rooms, two downstairs and two upstairs. Every room had a fireplace and as was custom of the times, a one-story lean-to ran along the back side of the house.

Tennison raised the usual crops such as burley tobacco, which had to be taken all the way to Danville to sell. He also raised corn, wheat, and vegetables for the family and farm animals. The wheat had to be cut with hand cradles and it was slow, hard work. The wheat was also thrashed by hand which was more hard work. When Tennison went off to join the Army, only 2 or 3 acres were cleared - those nearest the house. As a matter of fact, James his son was breaking in new ground with a bull tonge plow on the day his father went off to join the Army.

The peaceful life of the Tennison Jarvis family was soon caught up in the war. Like many others, he decided to join the NC Militia, hoping to remain closer to home, and possibly to stay away from the fighting. He reported for basic training in Salisbury on July 17, 1862 and was assigned to Company D, 57th Rifle Regiment. His son James drove the family wagon down to Salisbury to visit. On Sept 22, the records show that Tennison was reported on the sick list. Apparently the rough living conditions of the camp life had been bad for his health. He developed a chest infection, an illness that was quite common in the Southern Army. The 57th Regiment was ordered to Richmond in September, and Tennison went to Richmond a sick man. He was hospitalized in Richmond and then was sent home in February, 1863 with 4 weeks leave. We can only assume that Tennison thought he was well enough to get home safely. He walked the entire distance from Richmond to Winston Salem, NC. It was bitter weather and he had to ford the James River and other smaller streams and that, along with exposure to the elements, was too much for him. By the time get did get home, he was deathly sick and spent the next weeks bedridden and close to death.

But the Southern Army wanted him back in Richmond. Unfortunately, he had overstayed his leave and a troop of mounted horsemen were sent to fetch him. He left for Richmond a very, very, sick man. His last words to May Jane were "you'll never see me alive again." And she didn't. On March 25, 1863 Tennison Jarvis died in the Chambrzo Hospital in Richmond, VA. The records state that the cause of death was measles. His wife received the usual letter edged in black. I once saw that letter but it was later lost.

His body was sent to Greensboro, NC by rail. James drove the family wagon to Greensboro and brought his father's body back to Clemmons. He was laid to rest in the Old Harmony Grove Graveyard

Tennison Jarvis was a good, industrious, hard working man that was also affectionate to his family, and was respected and loved by them. Obviously, Tennison's family felt he had been unjustly used by the Army and that his death had been unnecessary.

I can still remember my Grandfather and Uncles standing around the smoldering ashes that were left after they burned Tennison's home down. They talked of the old days when Tennison and Mary Jane had lived, of the things their grandfather told them of those far way times. They spoke of how many years the old house, then a barn, had stood.

When I was a child I played in that barn, romped in the hay, climbed the log walls like a ladder. I played by the empty fireplace where their hearth fires had burned so warmly against the winter cold. I climbed in and out the same door that Tennison went through as he went off to war. It was an empty, deserted place when I knew it, just a shell of what it had been. A place that belonged to yesterday.