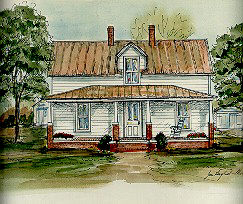 Charles Duncan was born in Virginia, according to census information, most likely Fauquier Co. which is where a large group of Duncan Families settled. Landon Duncan, who appears to have been his brother was born in Fauquier in 1786 and grew up in Stokes Co., NC. Family oral history states that as an older man, Charles Duncan would blush vehemently at the mention of the name CHLOE. It is my beleif that Chloe Duncan (dau of John Duncan and Dinah Bradford) was unmarried and that this was a source of embarrassment for Charles. This could explain the Duncan's that left Fauquier Co. and went to Stokes in the 1790's...only to return to Giles Co. in the 1810's.

Charles was certainly in Stokes Co. by 1812 when he married Sarah Covington (marriage bond carries the date 181-). Sarah bore him 6 children between 1813-1827. Charles remarried at Sarah's death to Anna Hill Ward and sired an additional 4 children. Charles was a farmer in the Dillard community, owning a sizeable tract of land south of NC #704 and considerable personal property (valued at $9170 in 1860)

The Rev. Charles Duncan is said to have been born about 1791 in Virginia. He died in Dillard NC in 1863 and was married twice. First, to Sallie Covington, d/o William Covington and Nancy Covington. After Sallie's death in 1827, Charles Duncan then married Anna Hill Ward. Below are their descendants:

(Notes from Kenneth D. Smith)
Landon Duncan, brother of Charles, was a minister in Giles Co., VA, first as a Baptist in the Order of New Lights, but after 1827 in the Disciples of Christ Church. One report of Rev. Landon Duncan states "among his converts was brother Rev. Charles Duncan...) Charles howeverwas not a Disciples of Christ minister, but rather a Missionary Baptist minister. Charles pastored Judson Baptist Church, founded in 1847, but dissolved in 1861.

The following obituary appeared in the Biblical Recorder (the state Baptist newsletter) on Aug 26, 1863:

Died in Stokes Co., NC, on the 18th of May, Rev. Charles Duncan, in the 72nd year of his age. Brother Duncan became a Christian in advanced life and for nearly fifteen years had been a minister of the Gospel. Though called away suddenly without an hours warning, he was ready, for his lamp was always trimmed and burning.-- He was universally esteemed and his loss will be seriously felt in his community. The aged soldier has fought his last battle and has gone home to rest. May his children try to imitate the example of their pious father and give their hearts to that Saviour whom he loved and for whose cause he labored.