You're invited to share your memories and photos of Ogburn Station 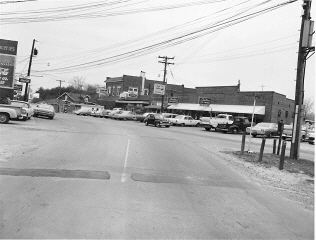 I stumbled onto your Ogburn Memories Page website and boy! what a trip for me. We lived around Ogburn Station most of our lives first, on Oak Summit Rd., then Cox Blvd. behind my grandparents Annie & Richard Tally and near my Aunt Trola and Uncle Dink Styers. Then we moved out on Hwy. 66 to help out with my grandfather Irvin 'I.J.' Grubbs after my grandmother Elizabeth Westmoreland Grubbs passed on. Back to Don Avenue after that and then up the street to Old Walkertown Road where our windows would rattle whenever the train went by! Lived right near that ole bridge and would cross over it often to visit two of my best friends, Darlene and Vikki. Yes, Daddy, Jack Tally, is still living behind Pulliam's on Graystone Drive at 82 yrs. young. He also ran T & C Auto Repair right behind that Esso Station and my Uncle Cecil Caudle (Darla and Don's Dad) was owner. We also remember going to the Dine In Car and watching the planes take off. The food there was great!!! And every Christmas Dad would take us up to O.C.East in Ogburn Station to pick up Momma a present so it would be from 'us", Ricky, and Jackie and myself. I remember the Mike and David Nail living down the street from us even though I was about 12. I have copied this and sent it to Daddy so he can relive some of those all memories. One more thing! Also, Daddy, Jack Tally, was a volunteer fire fighter along with Blake Ferguson. I was honored to have Mary Ferguson as my 1st grade teacher at Oak Summit Elementary. And we all went to Mineral Springs "Junior" High after the high school was moved to North and East Forsyth. -- Robin (Tally) Martin, North Forsyth '72

Ogburn Station. If you attended Mineral Springs the area became a part of your life. As a teenager I bought gas from Jack Tally and Cecil Grubbs at the Esso station, ice cream from Pulliams and you took your date to the Dine-In-Car. My first son, Ric, was delivered by Dr. Wiggins and had his first hair cut by Mr. Jordan. I bought a new home on Don Avenue and in 1958 opened The Sport Shop in a building leased from J. C. Caudle next to the Paragon. My brother-in-law, Ronnie Page, was still in school but worked in The Sport Shop. During this time I sponsord a basketball team made up of Jack Chambers and other Mineral Springs players in the City League. I had an arrangement with the Winston-Salem JCs to award player of the game trophy at the Piedmont Bowl. One year it was the kicker Sam Baker, the other was quarterback Eddie Lebaron. Incidently the basketball team won their Division. I closed the shop to become Sales Manager of Sportsman Supply and later hired Mineral Springs guys Jamie Wilkes and Ronnie Page. I used the Gulf Station for the next few years for gas, tires, etc. Bud Young did my cleaning for about 20 years. During this time I ate a bunch of Big Edd hotdogs, and Bar-B-Cues at Pulliams. I have traveled over a big part of this country and never have eaten a sandwich like Big Edd's. Piedmont Bus lines was behind Mr. Caulle's Shopping Ctr. in the beginning. If you played a juke box or pin-ball machine in the area it probably came from "Dink" Styers. From food to flowers Ogburn Station had most everything. -- Joe Gray Marshall, Class of '52. Note: Joe Marshall captured exactly the reasons I wanted to record the Ogburn Station history and our way of life "back then." If you grew up in the area, you know exactly what Joe is talking about. If you grew up in the area, you can walk every step with him. If you didn't grow up in and around Ogburn Station, you probably don't have a clue to what we're trying to do with this web site. Today is a different kind of world, but we can record "that place, that time" for future generations.-- Faye Jarvis Moran Ogburn station was named for my grandfather "Wick" Ogburn. A railroad schedule shows Ogburn as the first stop 4 miles from Winston-Salem in the 1890s. The railroad ran up near the Liberty Street level then. About the time of WW1 the RR was placed in the cut. If you are on Glenn Avenue and look at the bridge you can still see a flat straight line under the bridge. That is where the RR ran before the cut. - Jack Ogburn

Return to Memories of Ogburn Station
If you have reached us from Ancestry.com or another cached site, please go to http://www.fmoran.com/ogburnst.html to see the latest version of this page.
We welcome comments and inquiries. Please write me.
©, 2007, 2008
Faye Jarvis Moran
faye@fmoran.com