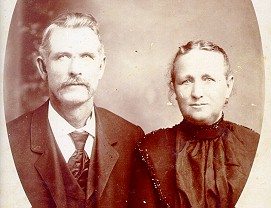 Alexander Tennyson "Sandy" Jarvis and Emily Sheets
I moved to Arapaho OK in Mar 1942 when I was 13. The past 57 years have dimmed my recollections but before I am finished writing this I will ask my wife of 50 years to review it.  She was born in Arapaho and tho she lived west of town she also knew about everyone there.

My older brother and I enjoyed lying in the Jarvis yard and playing Monopoly with the two girls, Helen and Joyce--guess that was mainly the summer of '42. The Jarvis family was as nice a family as you could ever want to know. I looked in the "Trail of 100 Years" Arapaho Book [of families] but could not find the Jarvises and can't recall who the girls married.  Mark was postmaster and, I think, Mrs Jarvis worked in Cy Howenstine's Arapaho State Bank. They lived next door to the small library bldg.  Arapaho had but few occupied bldgs then--Cy's bank, Homan's grocery, Cobb's general store, Sam Deason's Hardware, The Post Office, The Arapaho Bee Newspaper, Lacy's garage, a barber, an operating gin, and later a little drug store and that about it. -- Bill Morrison, Waco, TX, e-mail dated August 3, 1999. The Morrison's e-mail address is: mowaco@earthlink.net

Marcus Lee "Mark" Jarvis, son of Warren Jarvis, was adopted by Warren's brother, Tennison "Sandy" Jarvis. Sandy took Mark to his home in Arapaho, Okalahoma and raised him as his own. Mark kept in touch with relatives in North Carolina and returned several times for family reunions. By all accounts, Mark was a fine man and raised a fine family.

Return to the Jarvis Family page